A Voyage to Remember – Picton Castle to Luderitz – Kris Steyn

I was astounded to hear that the Picton Castle was offering me a berth from Cape Town to Luderitz and hoped that I wasn’t too old to be chosen.

The crew is mostly young, athletic and extremely competent, so I was aware of my shortcomings. I was confirmed, and one of my life’s greatest wishes came true. Rear Admiral Piet Potgieter (Ret), Chairman of Cape Windjammers, was to join me. Alvin Kushner, the Chairman of JML and representing JML on the board of SASLA was also invited but was unable to get away from prior commitments.

From the moment we stepped aboard with our kit-bags, it was a journey of discovery, the well-read seafaring tomes we had immersed ourselves in were no match for the reality. The crew were preparing to and the ship was in a state of anticipation that was palpable. I could only try and find a spot where I wouldn’t get in the way and lend a hand where it seemed appropriate. I got my first taste of heaving a ship with my puny muscles tugging on a hawser – it was amazing when the dock started to move in front of my eyes. We left the dock by the Cape Grace with many waves and fond farewells; one in particular from a previous crewmember who kept pace with a tear streaked face and promises of never forgetting us.

After a brief stop for fuel, we were under way – the sails were set and we headed out past Robben Island for deeper waters. The motor was still running, charging the batteries, and when all was well and the motor switched off – the magic of true tallship sailing enveloped us. Words cannot express the emotions generated by the soft sway of the masts under full sail, completely in tune with the swish of the bow as it cleaved the gentle seas, a following sea and wind in complete agreement.

Piet and I were bunked in the main salon with a bevy of mixed crew around us and the professional crew forward. This ensured we were immediately “one-of-them” and the job of meeting and remembering 47 crewmembers names began. I started with the people on my watch , we had the 12 – 4 , only 12 names , which sounds little , but I had to start remembering the names of all the ships rigging lines as well. All commands aboard are given assuming the crew know the exact meaning, and as approx. 300 lines each have a specific name and a very specific task, with bad results when confused, the knowledge of which is which is critical. Most of my brain cells were consumed with this important task.

Our first safety procedure was a fire drill – and whilst Piet and I looked on, the alarm was sounded and the crew’s team-work proceeded like clockwork and the supposed “fire” was extinguished immediately. This is an integral part of the ships operations with regular training given. Nothing is accomplished aboard without safety being included. The next safety procedure occurred 2 days later when the “man-overboard” drill was accomplished with professional smooth and easy skill.

The Picton Castle has a classic mix of foresails, square rigged sails and gaff rigged mizzen, each style having different lines and actions, so we got an excellent grounding on what true sail training as all about. Combine that with the traditional hemp rigging used, which shrink in wet conditions and sag when dry, requiring continuous examination to determine correct tension, and the watch crew were kept pretty busy. Our night watch was a little quieter as the previous watch (the watch Piet was on) had already set the sails as required, and with very steady weather conditions, we weren’t too busy. The day watch was different in that “duties” were performed and all available crew reported to the Bosun to request the next item on the list. For me this included cleaning the heads, crew quarters and sanding wood for varnishing.

I was deemed good enough to take the helm and steer this (much larger than I am used to) ship under the eagle eye of Dave, my ever patient mentor. This was a much bigger challenge than I anticipated, with me making frantic course alterations and our bow swinging 30 deg. “the-other-way”. I came off that first 30 minute session thoroughly chastened and humbled – and vowed to do better. Of course I did and on my last watch at the helm was more a friend of the wheel than an adversary. When I shared my appalling actions with Piet, he said that he too had had some difficulties, but when I saw him, he looked so cool and calm, I suspect his navy training accepted 5 deg. off course to be “needs improvement” as opposed to my 35 deg.

The weather was absolutely perfect, and most of the time, all sails were set and with us making good speed. We had a little overcast on the 3rd day and some fog, but always enough wind to sail.

A surprising bonus of all this was the catching of fresh fish. We had 4 lines trailing astern and managed to fill the freezers with Tuna and Yellowtail as well as a sumptuous dinner of Sushi and the best tuna steaks I have ever had the following evening. The cook Donald and his able assistants created an unforgettable assortment for everybody and I was amazed when I saw that we even had left-overs.

The chores on a ship this size are never-ending and the crew is kept busy , we soon fell into the routines and it seemed on my 3rd day that I could do this for-ever, however, we were approaching land and our next port was close. The fog that is so much a part of the Namibian coast was just thick enough to keep us on our toes and as the car lights ashore were visible, we were careful with constant attention to the charts and course and extra lookouts.

Our entry to Luderitz the final morning was gentle with the fog lifting occasionally to give us tantalising glimpses of fishing boats, buoys, the shore, the pilot, and finally the harbour which was shining in full sunlight to greet us. We came alongside with the gentlest of bumps and the lines were made fast in a trice. From dock to dock we had the impression of being aboard a true sailing ship with the values of yester-year and the skills so largely forgotten in today’s modern world.

Unfortunately, I was not going to continue with the voyage, and left feeling that my life could only improve if I could also spend “two years before the mast”. I shall remember my Picton Castle experience with a complicated “sense of achievement” balanced with a “started too late in life” and a resolve to continue with Tallships in any capacity possible. I can only thank Captain Dan Moreland and his accomplished crew for making this possible.

In all my life’s travels, the camaraderie and sense of family that I found aboard was certainly the tightest and happiest I have ever encountered. If YOU have the opportunity to crew on a Tallship, I believe it is one of the truly great experiences available to young people today. 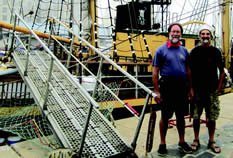