An Anchor for Life – Bertie Phillips

After an initial visit to South Africa by some 10 youth sailors from Israel back in 2004, made possible by the JML, some 7 years later, Bertie Phillips and his daughter Aviva Phillips travelled to Israel in April 2011 and made contact with, Dido Daadush (21) who was 14 at the time and Zeev Shafrir who was the group leader.  Together they rode their bicycles from Tel Aviv to Yaffa Port where they met with the Israel Sea Scouts leader Dr Colin Gorﬁl (70) who made aliyah to Israel from South Africa in 1967.

The purpose of the visit to the Israel Sea Scouts base in Yaffa Port was to obtain information on the “AN ANCHOR FOR LIFE” programme. This is a social programme that target boys and girls between the ages of 12 and 18 who either do not frequent school or are on the verge of dropping out of the formal education system. These adolescents include both Jews and Arabs, Israeli born “sabras” and new immigrants from the former Soviet Union and Ethiopia.

Through their participation in the maritime programme these unfortunate youngsters acquire the skills to satisfactorily deal with the dangers they face. Matching oneself against the open seas enables increasing self-awareness, self-control and inner discipline. Combined with team work the youth the programme helps to provide a socially acceptable and personally challenging alternative to drugs and substance abuse. The programme includes the development of life skills to enhance the process of self-empowerment and decrease anti-social behaviour.

It was a great moment when Colin and Bertie agreed to explore a further exchange whereby two South Africans would be invited to spend a week in a Summer Programme with the Israel Sea Scouts, possibly as soon as in July 2011. After a cup of coffee and some biscuits in the Yaffa Sea Scout Base, the delegation featured in the photo below took a swift ride to Tel Aviv Marina and back in the Israel Sea Scouts Zodiac that accompanies the youth on their sail training expeditions.

Colin kindly invited JML members to make contact with the Israel Sea Scouts when next in Israel and to go sailing on the Mediterranean Sea. 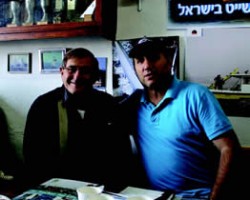 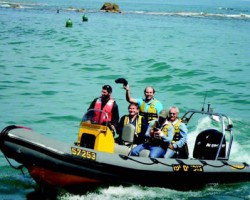