JML1 is being well used and once again entered th eprestigious Lipton Cup Regatta. The race was highly competitive with the best skippers in the country competing. . During the last of 5 races JML 1 made contact with the yacht Race Ahead’s stern at the finish line. Some brisk conversation ensued between the crews and JML 1 did the sporting thing and went back across the finish, did her penalty turns, and refinished in 14th place losing two positions. Interestingly when I approached Race Ahead to ascertain if there was any damage they indicated that they had not called a protest on JML 1. Regardless of this I was impressed by the sportsmanship of the team. Elsumo went on to finish a strong 8th which dropped JML 1 to 13th overall for the regatta. So a collective sigh of relief and accomplishment from the team and return of smiles when I assured them that the finish line incident had not affected their overall position. I now realise that this could have cost them the Youth trophy! What a fantastic surprise to win this award. We did not know that there is a clear formula that takes all ages of the crew, takes out the oldest, then compares this average with the regatta overall points, so the prize was a complete surprise! We must have scored the required lowest points per average age year. 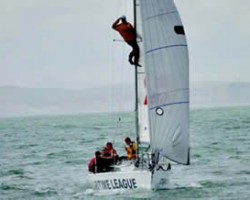 JML 2 is based at False Bay Yacht Club and is used primarily for junior sail training, including the annual Lipton Cup Regatta.  She took part in Lipton 2010, with extensive practice and training prior to the event, completing two Cape Point roundings during the delivery to and from Cape Town, which gave a team of youngsters valuable experience, with Jonathan Cole as skipper/instructor.  She sailed the regatta with a youth team under the burgee of the Mossel Bay Boat and Yacht Club.  2011 sees a new strategy, whereby FBYC is in discussions with local school with the aim of making sailing a serious school sport and encouraging young men in high school to get a team selection process in place to sail JML 2 and another FBYC L26 in club races under the guidance of the FBYC Sailing School.

The Hout bay Yacht Club’s programme to send an emerging racing crew to the 2011 Lipton Cup in Mossel Bay got off to a flying start when four young sailors finished in a very creditable fourth position overall in the opening round of the club championships.  Making their debut in HBYC’s JML 3, an L26 Class , Martin Stander, Stuart Coleman, Seth Berrange and Aden Lacey provided a serious challenge for even seasoned sailors in the fleet.  HBYC has a fleet of 09’er class dinghies which are used to train novices from the community. Those who emerge from this basic training and are keen to progress to keelboat racing will be invited to sail the L26 class of which  there is only one at this stage. The programme for the L26’s will be to train hard in the next few months,  taking part in the club races with the winner going to represent HBYC at the Lipton Cup Challenge which will be held in Mossel Bay.