Two ships were drifting helplessly in the North Sea. High winds and stormy seas damaged the rudders and the ships were at the mercy of the storm. Fortunately, the ships were driven towards the shores of the Netherlands, and ﬁnally found shelter in a Dutch harbour.

Among the passengers on the ships were ten refugee families from Spain. They appeared to be Spanish noblemen, but actually they were Marranos – secret Jews – who remained loyal to their faith despite the persecutions of the Inquisition. To all appearances they were Christians, but in secret they observed their Jewish faith and festivals. Life in Spain, however, was made impossible for them, for the agents of the dreaded Inquisition watched them constantly, and anyone suspected of practicing any Jewish precept was burnt alive at the stake, and his wealth was forfeited to the Church. And so these ten families had hired ships and ﬂed from Spain in search of a friendly country, where they would be able to throw off their hateful disguise and become Jews openly and freely.  Divine Providence brought them to the shores of Holland, which, not long before, had freed herself from Spanish domination. These Jewish families were among the noblest and richest in Castilla (Spain). They were fortunate to be able to take with them a great deal of their possessions, gold, silver, household goods and merchandise.

While the ships were undergoing repairs, the Marranos took their possessions off the ships, and rented rooms in the harbour.  After a good night’s rest, one of the passengers together with his son, took a walk. They passed a butcher store, where a ﬁne duck was hanging in the window, with a label on which there were two Hebrew words “bassar kosher” (kosher meat). The boy had never seen such writing before. “What strange language is this?” he asked his father.  “Hush”! his father replied, and the boy wondered why his father’s face suddenly grew pale. They went right back, and the father asked the innkeeper, “ Are there any Jews in this place. and are they allowed to live in peace”? “Yes senor”, replied the innkeeper. “Since our country threw off the yoke of your country twelve years ago in 1581, this has become a free country, where anyone can live in peace and worship his G-d according to his faith. This was wonderful news, and the senor continued to ask the innkeeper if there was a Rabbi in that community, and could he perhaps introduce him to the Rabbi. “Certainly, senor I will be glad to take you to the Rabbi. He is a ﬁne gentleman, beloved by all. His name is Rabbi Moshe Uri, “ the innkeeper said.

Two elders of the Marranos lost no time and went to see the Rabbi. Rabbi Moshe Uri Ashkenazi had come from Germany and the little Jewish community in the Dutch harbour town welcomed him and honoured him for his learning and kindness to all. When the two Spanish noblemen came to him, he received them in a very friendly way, but could not understand their language. His son Aaron served as interpreter. “We have conﬁdential business to discuss with you”, the Spanish gentlemen said, throwing a suspicious glance at the young man. “You may speak freely, gentlemen,” the Rabbi replied, “ for this is my son Aaron”
The two Marranos told the Rabbi who they were, and how they chanced to come to this town. “We want to return to our faith and be reunited with our people. For many years we have risked our lives to remain loyal to our G-d and our Torah; we are uncircumcised; our children do not even know the “aleph-Beit. But the ﬁre of devotion to G-d still burns in our hearts. Help us, Rabbi, to return to our people.

Rabbi Moshe Uri listened to their story, which had moved him to tears. When they ﬁnished their tale of horror of what they had been through under the shadow of the Inquisition, the Rabbi replied, “My dear brethren, in this place it would not be advisable for your to stay.  There are very few Jews here, and your arrival has already created a stir in town. The country people are suspicious of Spaniards and we might all get into trouble. However, the city of Amsterdam is not far away. There is a larger Jewish community there. Go to Amsterdam, and rent rooms in Junkerstraat, and hang out a red ribbon from the window.  In a few days from now, we will come and circumcise all your men and boys to bring you into the Covenant of our father Abraham. Then we will teach you all you have to know about our faith, and you will live with us like brothers”.

The Marranos followed the Rabbi’s advice.  In due course , Rabbi Moshe Uri and his son Aaron arrived in Amsterdam and went to Junkerstraat. Soon they were embraced affectionately by the Marranos. The brit ( circumcision) took place quietly.  The ﬁrst to enter the Covenant of our father Abraham was Don Jacob Tirado, the eldest and noblest of them all. Then one by one they were all circumcised.

After they recuperated, Rabbi Moshe Uri and his son began to teach them all that Jews have to know about their faith, how to pray from the siddur, say the blessings, put on teﬁllin, and so on, and the Spanish Jews learnt with diligence and devotion, until they needed the services of Rabbi Moshe Uri no longer. They sent word to their Spanish brethren , relatives and friends, secretly informing them how fortunate they were to be in Holland, and urging them to join them. Thus the little Spanish Jewish community grew, under the leadership of Don Jacob Tirado. They lived quietly, trying not to attract too much attention, as the fear of the Inquisition was still very strong in their hearts.

Then came the Solemn Days of Rosh Hashanah and Yom Kippur.  The Marranos in Spain always observed the Day of Atonement.  They used to gather in the cellars of their homes to pray to G-d on this most solemn day of the year. Now being in free Holland it was not necessary for them to do so in secret, but they were still frightened in case the long arms of the Inquisition might reach even here. So they locked the doors of their synagogue and prayed to G-d as never before.

Now the neighbours who had noticed many Spaniards gather in one place behind locked doors, with strange sounds coming from inside grew suspicious. They notiﬁed the Governor of the city of the secret meeting, where they were sure a plot was being made against the free country of Holland in order to recapture it for the King of Spain.

The Governor himself led a platoon of soldiers to Junkerstraat. He knocked at the locked doors “Open in the name of the Law”! The worshippers nearly died of fright. Somebody shouted, “the Inquisition is here ! and a terrible panic broke out among the frightened worshippers, who began to jump out of the windows to escape, but most of them were rounded up and captured. Only the venerable Jacob Tirado remained fearless to face the intruders. The soldiers searched the place for weapons , but found nothing but prayer books and talleitim.

“Who are you and what are you doing in this place so secretly?” the Governor demanded to know.
Still unable to speak Dutch, Don Tirado addressed the Governor in Latin. He told him who they were, how they had escaped from the terrible Inquisition, and would never wish to see it spread its ugly wings over this peaceful and free state. He told him further that it was the holiest day for the Jews, the Day of Atonement, and they had gathered to pray to G-d. But the fear of the Inquisition was so strong in their hearts that they still gathered to pray in secret. Don Tirado further told the Governor that they were useful and peaceful citizens, that they would not be a public charge, but rather the contrary, or for they had brought their wealth with them and were already developing trade and commerce for the good of the country. The Governor was greatly impressed by the words of Jacob Tirado.  He shook his hand, assured him that they were welcome, and more like them would be welcome in free Holland. “You may worship your G-d here in freedom, and without fear.  Pray also for us, “ he said as he took his leave with a friendly smile.

It was a great day for the young community of the Spanish Jews in Amsterdam. At last they were rid of their fear.  Soon they built a real synagogue, which bore the name “Beit Jacob” after their beloved leader, Jacob Tirado.  One of the ﬁrst Rabbis of the growing community of Spanish and Portuguese Jews in Amsterdam was the famous Rabbi Manesseh ben Israel. 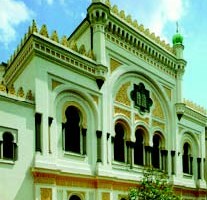